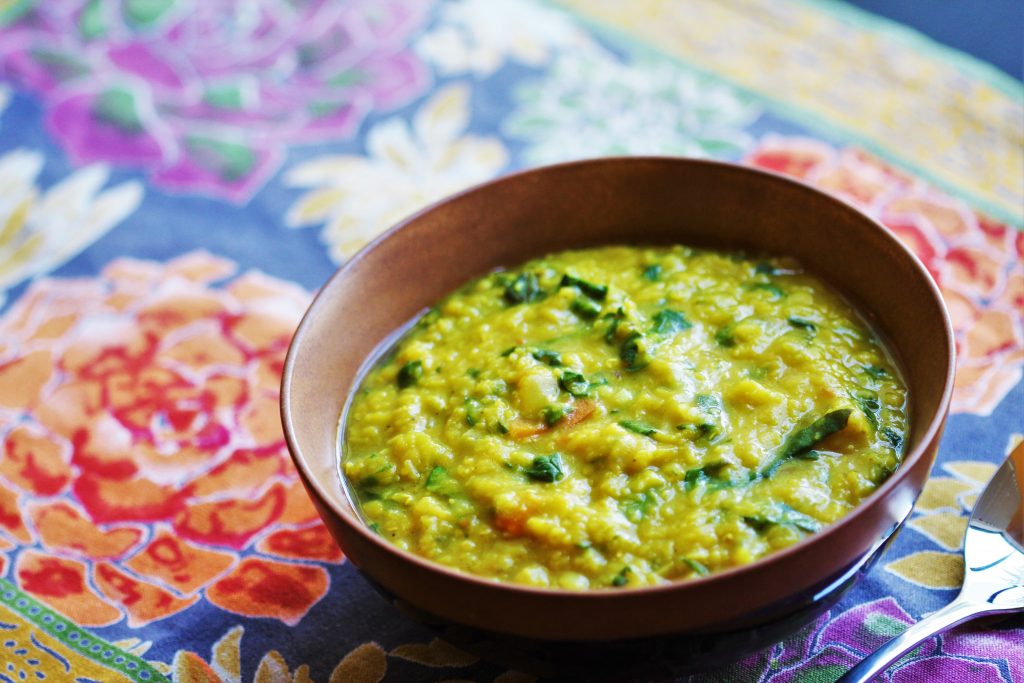 This rustic golden-hued lentil soup is packed with flavor and nutrients. Red lentils actually turn a beautiful shade of gold when they cook. Beans, greens and spices are the healthiest foods on the planet and they are all here in one simple bowl of soup. I love this lentil soup as a simple supper with a slice of crusty whole grain bread. If I forget to make my homemade cashew soy yogurt as a topping for the soup and if I’m feeling a little decadent, I may shmear my bread with a bit of nut cheese from Miyoko’s Kitchen or Cultured Kitchen.

Shortcut Tip: Instead of cutting up the onion, celery and carrot yourself, if you shop at Trader Joe’s, use a container of Mirepoix, found in the produce section. It cuts down on prep time on busy weeknights.

Nutrition Facts: India has the lowest rates of colorectal cancer in the world. This is attributable to the traditional diet rich in beans and legumes including lentils, vegetables, whole grains and spices, including turmeric and ginger. India also has one of the largest populations of vegetarians in the world, with 31% of its citizens following a meat-free diet.

In a 2001 study in the journal, Cancer Prevention Research , two groups of smokers were given either 2 grams or 4 grams of curcumin (the active ingredient in turmeric) per day for one month, then given colonoscopies to determine whether or not the turmeric could reduce the number of ABF (aberrant crypt foci), precancerous cells in their colons. Researchers found that those who took 4 grams per day had a significant reduction in ACF, while those on 2 grams did not.

Foods and spices work together synergistically. By building our diet from whole plants and spices from around the world, we benefit not only by reducing our risk of cancer and other chronic diseases, but also by expanding our palates.

You have Successfully Subscribed!

You have Successfully Subscribed!